Lance invited Paul to his apartment later that week. There was a lot to do. He opened the door to his apartment and surveyed his open living room. The area rug had to go. He didn’t want to ruin it, after tonight… He wasn’t sure just how it was going to turn out.

The witch doctor had given him an incantation to use, which Lance felt extremely skeptical about. It would suck if he had to go through with the whole ritual and it didn’t work.

It felt dry in his hand, and a shiver ran up his wrist as he stooped to draw a large, white circle on the floor.

Inside the circle, he drew a star, with a center large enough for him to sit in, as long as he scrunched himself into the fetal position.

Next, he pulled out the body of a dead chicken from the brown paper bag; he had strangled the chicken on the way up in the elevator.

It didn’t take much to bite off its head. Blood splattered onto his shirt and ran to the floor like a faucet. He immediately turned the chicken right side up to retain as much of the blood as possible.

He stepped back into the circle and lifted the chicken over his head to pour the blood all over his body. Like shampoo, he instinctively rubbed it into his scalp and clothes before he remembered what he was doing. It smelled rusty and at the same time felt renewing, if not, at least sticky.

He was interrupted when he heard a knock at the door and then, “Hey, Lance! It’s me, Paul. The door’s unlocked; I’m coming in.”

The door knob creaked and Lance knew it was now or never. He had to do it; if he wanted Talia, he had to kill Paul.

The door swung open, but Lance hadn’t moved an inch. He wished he could have felt what Paul was feeling. The look on his face was startling. The way his smile ran from his face and became so foreign and frightened. He turned to run, but Lance was ready for this. He pulled out his last tool from the brown paper bag: a small revolver. Lance had never shot one before, but the witch doctor told him it would never miss.

He squeezed the trigger. It wasn’t that hard. Paul fell down. His thud echoed loudly and Lance knew he had to react quickly if he didn’t want anybody asking questions.

He dashed out the door and picked up Paul. ‘Heavy,’ thought Lance, ‘Dead people are heavy.’

He managed to drag him past several doors and back into his own without anyone coming out to investigate… That struck him as odd, but he took it as a Godsend, that he and Talia were meant to be, that Paul’s only purpose was to bring them together. It was supposed to be this way.

He placed Paul one the circle and upon each symbol, he placed Paul’s head, arms and legs. Paul’s body stretched outside the circle, but that wasn’t a problem. The issue was cutting the body just right so Paul’s blood dripped onto each symbol, therefore activating the magic circle.

He went to the kitchen and pulled out a steak knife, and after carefully examining Paul’s placement, cut as deep as he could. It flowed perfectly. Like the chicken it seemed and streamed and gushed, not as if it were alive, but at if it were being drained.

Lance wiped his brow and looked at the clock on the opposite wall. Talia should be there soon. If it didn’t work, if the magic of the witch doctor was a joke, a horrible crime… He was a murderer… He killed his best friend… But Talia was worth it. When she walked through the door and Lance spoke the incantation she would be his. That was all that mattered.

She should be arriving any moment. What would she think of this mess? keeping her in the room would be difficult, he would have to act fast.

It was now or never. He answered a meek, “come in,” and watched as the door knob turned, just as it had before.

There she was. Her mouth contorted into something aweful. A scream, muffled by the collapse of her own throat. She turned to run, but Lance drew the gun and shouted, “Don’t run or I’ll shoot!”

She hesitated. He was sure he knew why. As loudly as he spoke, someone was sure to interfere. The hallway stood silent for a moment, and then Lance spoke as evenly as he could, “Turn around, come inside, close the door.

Talia did as she was told. Her eyes flittered into a morse code of fear. Paul was on the floor; her eyes drawn to him, her watery eyes, shutting and splashing as her knees weakened and she fell upon them.

She only looked up when Lance began to chant the incantation:

He continued the chant, all the while Talia’s eyes went from wet to dry and her body went from shivering to still. She was calm. She surveyed the scene as one would contemplate an ant carrying a crumb of bread on the sidewalk. They kneeled, transfixed on the body in the circle, until Lance had finished.

Did it work? She just sat there.

“I love you Talia…” Lance said, not sure what to say.

“I love you too,” she said. Her eyes remained transfixed on the body.

Lance crept towards her and kneeled in front of her face. Her eyes looked like doll eyes, open but not seeing.

“I love you,” he said again, trying to put as much emotion into it as possible, to transfer his feelings into her eyes.

“I love you too,” she said. Her faraway stare was disarming.

“Stand up,” he said, feeling a bit angry.

“Take off your clothes.”

Lance had never seen a real naked woman before. He wanted to arouse her, to bring her alive again.

He gave her breasts a gentle squeeze and gently massaged her nipples. But she did not respond.

He pulled her close into a warm hug and kissed her mouth. She did not kiss back.

He slipped his fingers into her vagina. She simply stared into space, forever gone.

Lance backed away. He wiped his sleeve across his forehead and stared at her. Had this all been for nothing? She didn’t love him. She was a robot!

He turned to the floor. Paul’s body, twisted into his stupid spell formation, all for nothing, for a slave, a slave that couldn’t do what he wanted her to. This was not what he wanted.

“Ow do chu like me incantation?” whispered a voice behind him. Lance turned to see the witch doctor lounging on his couch.

“What have you done? This is not what I wanted!”

“Dis is exactly watt chu wanted. She is yours. Your competition is gone. Take pleasure in dis moment.”

Lance turned to Talia, then to Paul’s body. “I can’t believe you made me do this!”

He turned back to the witch doctor but he was gone.

Just outside, he heard them, the sirens. He heard the footsteps tramping up the stairs and down the halls. It was time; what would he do?

He saw the gun that never missed, lying on the floor. He contemplated fighting back, but the end was here, he had killed his best friend and ruined the love of his life, there was only one out now.

The police broke down the door and upon entering were shocked to see a naked woman, back to them, staring at a dead man lying on a couch, his brains littered the wall and a gun clenched in his hand. 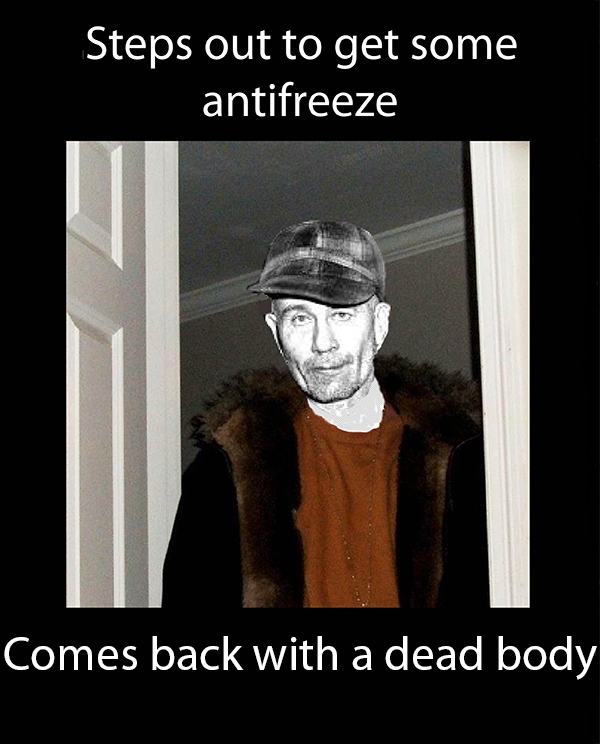