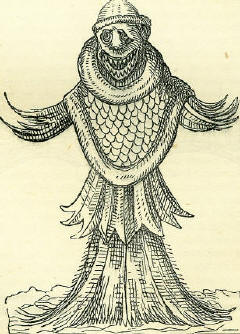 The sea monk is a legendary creature that inhabits Scandinavian waters as well as farther east. It was rumoured to have control over storms.

Description: a cloak of scales, greatly resembling a monk, but with an ugly face.

The Story: The Smithsonian Magazine dug up research from Renaissance Europe:

Sometime between 1545 and 1550, the peculiar sea monk washed up on a beach near, or was caught in the Oresund, the strait between modern-day Denmark and Sweden. The actual circumstances of its discovery have never been well-documented. None of the naturalists of the day who drew or discussed the animal had ever actually laid eyes on the sea monk specimen. It was described as almost eight-feet-long, having mid-body fins, a tail fin, a black head, and a mouth on its ventral side.

A published account in the 1770s—which drew upon the Renaissance scholars’ work—described it as an animal with “a human head and face, resembling in appearance the men with shorn heads, whom we call monks because of their solitary life; but the appearance of its lower parts, bearing a coating of scales, barely indicated the torn and severed limbs and joints of the human body.”

It’s a little disappointing, that they weren’t able to take a picture (due to the times), but also that no one sketched it. The description is a bit non-descriptive.

The Japanese have their own sea monk stories, “Umib?zu, a spirit in Japanese folklore… 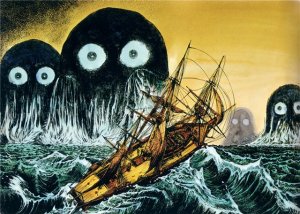 so called because of his smooth monk-like round head — is said to capsize the ship of anyone who dares speak to it.”

Umibozu is considered a misunderstanding of natural phenomena. “The shells of great ocean sea turtles or massive jellyfish rising suddenly from the water, or a black thunderhead of clouds rising in the distance have all been sited as the origin of umibozu legends.”

As far as the washed-up creature, if I may editorialize, I’m leaning towards the angel shark or a ray of some sort. As a child, when I saw rays at the zoo, I thought their faces were on their flat sides that they proudly showed against the glass. I can’t find when stingrays were discovered, but I suppose if no one had ever seen one before they would think it was a strange creature. 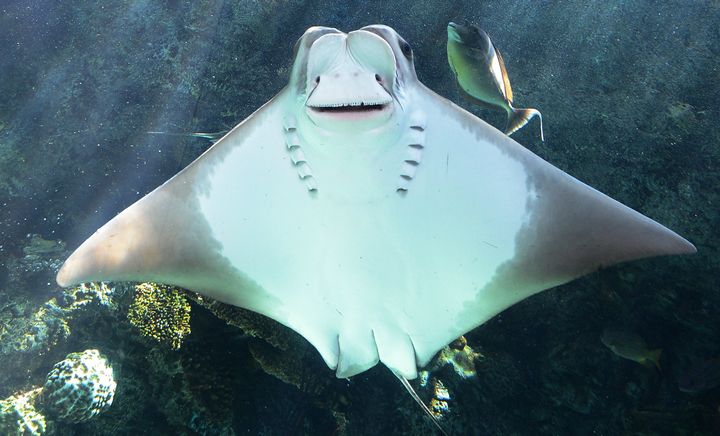