The Cynocephaly! Werewolves? Lycans? Dogmen? What the hell?! Part 2

Now for the second part of this series, I wanted to go into the psychopaths who claimed to be werewolves. Werewolves are those who are able to change from man to wolf, typically through the use of an ointment or wolfskin belt. There are also stories of contracts with the devil, like the story with Pierre Burgot.

In Burgot’s confession, he spoke of being a shepherd and whilst in a thunderstorm he was having trouble controlling his flock. Along comes 3 riders all dressed in black. They stop and ask him his troubles. He tells them that he is afraid of losing his sheep. One tells him that if he renounces all masters and claims him, the rider, as his lord and master, no harm shall come to his sheep. Burgot, renounced God and claimed that man as his master and his flock was fine.

He later meets with Michel Verdun, another in this dark circle, who has a special ointment that changed them into powerful wolves of supernatural prowess. Thus a killing spree began with many children and lost travellers. They go into detail about eating the children, and how they preferred sex with she-wolves over women.

The two were burned at the stake with a third that Michel Verdun pointed as another werewolf, but he did not confess.

This was in France, 16th century. 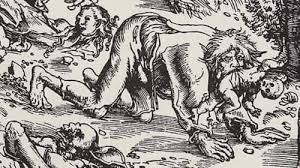 Giles Garnier was also a Frenchman in the 16th century. He was a hermit, but as the story goes he got married at some point. He found it difficult to provide for a family and he confesses that he was visited by a spirit that delivered to him an ointment that would make him a better hunter.

In his village children went missing only to be found mutilated. The community decided it was a werewolf and went in search of it only to find Garnier hunched over a human child.

He confessed and was burned at the stake. 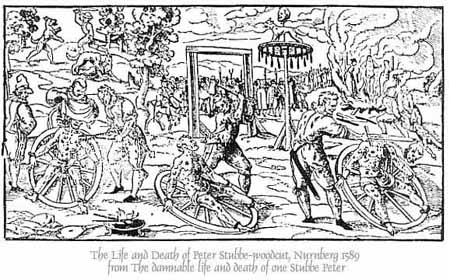 And of course I’m going to talk about Peter Stubbe, one of the most well known “werewolves,” however even I learned something new here. Stubbe was a wealthy farmer in Bedburg Germany. When the people of Bedburg began to disappear, the finger pointed at Stubbe.

Stubbe confessed, but only after being tortured, so it makes me wonder how much is true. He was stretched on the rack and confessed to eating several children and pregnant women, along with their fetuses. He said that he practised black magick since he was 12 and that the devil gave him a special belt that allowed him to transform.

After this, he was further brutalized and executed.

Honestly, when it comes to Stubbe, I’m leaning towards someone wanted his land and accused him of werewolfism. Though I would have to do a little more research and see what more I could find. The others, I believe were psychopaths. That being said, I’ve had my own run-in with a devil which was similar…

The “ointment” could have been a type of hallucinogen when applied to the skin made the person believe they were a wolf. I think that is a working theory. Cannibalism makes me queasy though so next time I want to talk about Odin’s Elite Warriors, who were wolf-like in the fighting spirit.