I have a strange feeling that whatever citizens of Mobile, Alabama saw in early April 1971, didn’t look like the picture drawn up for the newspaper. That is the original picture from the paper and I have included an image with the original article underneath it. 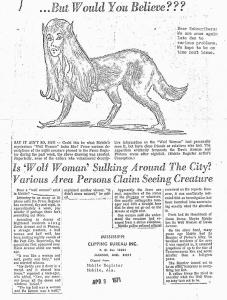 When I see this picture, I have a myriad of thoughts. My first thought is why is she so sexy? Next, I would love to know how witnesses described this beast. Honestly, I would prefer to hear the 50+ phone calls that rang out to the Mobile Press Register. If a creature like that stalked me in Mobile, Alabama, I’d take my chances and ask her if she wanted to go get a juicy steak instead.

There isn’t a lot known about the Wolf Woman of Mobile, except that she had a woman’s face, breasts, and hands, but all covered in fur with a wolf’s hind quarters. The article doesn’t really explain much, but reads that she had a top half of a woman and a bottom half of a wolf.

These are some of the witness statements taken out of the article:

“It was like a woman and wolf, pretty and hairy.”

“My daddy saw it down in a marsh and it chased him home. Now, my mommy keeps all the doors and windows locked.”

“The top half was a woman and the bottom was a wolf. It didn’t seem natural.”

Sightings of this creature lasted for about a week and they began on April 1st, which leads many to believe that it began as an April Fools prank.

I’m not entirely convinced that 50+ people would be in on this April Fools prank in 1971, but who really knows for sure.

The article ends with a reference to something in Mobile’s past that, apparently, varied in size from that of a T-Rex to a large mountain lion. The Monster of Fisher’s Alley turned out to be nothing more than an river otter.

That said, nothing ever surfaced of the Wolf Woman of Mobile. Was it just a big dog or an escaped alien hybrid experiment? Who knows.