There was an ogre attacking the city, and all that stood in its way were two frightened guards, Richie and Clayton, and a large, stone wall built around the city in case of such dire circumstances.

Now, these two were no ordinary guards; they were, in fact, the lowest of the low in strength, experience, and looks. Though mind you, looks don’t typically help in the case of fighting ogres, unless you are a pretty damsel with light blue eyes and long brown hair, that is neither here nor there because both were in fact boys, if not young men, and Hedersberg, the city that now finds itself under attack, has barely any fine damsels to distress.

Hedersberg is a lowly city that exists well beyond many of the other cities constructed by man, and pushes closer and closer to the woodlands and mountainous areas, very far away from any more distinguishable and, need I say, mentionable cities in the country of Blythe.

Hedersberg is nothing in comparison to the shining city of Bellzadad or the capital city Couroach, but it does have its finer points. It has a sizable army within for protection. Though today that doesn’t seem to matter nor do the other finer points if the city is levelled by an ogre.

And in all eventuality, that is more reasonable a conjecture than that the two young men, Richie and Clayton, will seize the day and cleverly and astonishingly grasp victory from the palms of a putrid, pummeling, punkenstein like this mighty foe that is attacking the city’s wall.

For those who do not know, ogres are massive. If you’ve never seen one in real life you have NO idea. 10-15 ft tall and around 2000 lbs. Ogres are not fat, oh no, those tales are reserved for children and ninnies.

Ogres are not dumb, though comparatively to man, they are somewhat lacking, but what they lack in intelligence, they more than make for with brute strength and a willingness to destroy anything and everything within a 5-mile radius—the average ogre anyway.

Besides that, they have dark gray skin and large, tusk-like teeth coming out from their lower jaws. Ogres have a rather impressive under-bite.

If I may move on and indulge your curiosity further, an ogre can smash through a stone wall, like the one around Hedersberg city, in about 30 minutes. About 30 men can kill an ogre in an hour–the more men, the faster the takedown.

Luckily the city of Hedersburg contains 30 officers and 45 lower-ranking soldiers. However, most are on lunch. As per natural for most soldiers in Hedersburg, at 12:00 pm they all sit down for a hardy lunch and of course, they have an hour lunch which comes standard when serving your country.

Of course, the major problem is that they have only been gone for 15 minutes and, because of the strict rules of the Soldier’s Union, will not be back for another 45.

So Hedersburg has about 25 minutes till the wall comes crashing down (It took me that long to explain to you the logistics). And the other officers have about 40 minutes left on their lunch break. Now I’m sure you’re thinking to yourself, well who cares about a stupid lunch break, these soldiers should save this town.

Well in most circumstances you’d be right, but the people of Blythe are dictated by a certain set of rules which restricts them from doing anything practical. I’m sorry, that is my own bitterness coming out.

Mankind is not completely ridiculous, though when it comes to taking care of one another, we typically walk away. It has nothing to do with magic; no one is possessed into this selfish nature, it is simply a system of worrying about yourself and keeping out of one another’s business. It’s a lesson that is taught in our youth.

Though magic has nothing to do with these idiosyncrasies, magic does play a huge part in our lives. Through magic, the people of Blythe have created very useful items that upon further inspection serve absolutely no use at all.

For instance the teleball. Communication tool yes. A crystal ball that serves to communicate with other crystal balls. It has its uses but it also has led to more than a couple of motor carriage accidents. I suppose for now these things can wait as to the imminent destruction of Hedersburg is underway.

By now it seems that Hedersburg has 15 minutes and of course the self-serving soldiers have 30 more minutes of break time. As Richie and Clayton watch in horror as brick by brick shatters in the hot enraged fists of this ogre, it seems that all is, indeed, lost. Time is up; the wall is down and the soldiers still have 15 minutes till break time is over.

The people of Hedersburg are, as you can imagine, genuinely upset over this.

“Why did they take their break at the same time,” they shout in unison.

But no one can hear them over the loud booming and crumbling of their city wall. Who would have guessed that such a thing would happen? The fact is things like this rarely do. As any ogreologist would tell you, ogre attacks happen very minimally.

Ogres tend to live in forests and large caves, typically in colonies up to ten. They usually don’t leave their homes except for food and they don’t usually come to very populated areas and cause trouble—unless they are particularly angry.

And this ogre seemed very angry. As typical of many ogres, this one brandished a small, thick tree as a club and alternately slamming with the club and his left arm, beating the wall, until it crumbled.

And without further ado, the ogre has now thrown his first cabbage stand out into the civilian homes knocking down at least two buildings. Ogres are scary. The people of Hedersburg are running wild, and who can blame them.

They are just as angry as the ogre and some are even trying to fight the ogre themselves. Bad idea. They are immediately crushed under the tree club. Some have decided to take a less Darwinian approach to the problem and tried to reason with the beast. Bad idea. They all went splat against the ogre’s hand.

Richie and Clayton, our only line of defence, were cowering in a corner of the unbroken wall. They had tried all they could think of: they threw some torches at the beast, but that only made it beat faster; they tried to impale him with spears, but the spears would not penetrate the ogre’s thick hide.

Did I forget to mention ogre skin is near impenetrable? I did? I’m sorry; must have slipped my mind. Without any experience and an excess of pee in their trousers, the two had resigned to cowering in their corner, hoping to somehow avoid death.

“What do we do?” cried Richie.

“Give up,” said Clayton, “We can’t defeat this thing until the rest of the soldiers come back. Wait a minute…”

“Do you see that pink… object? It’s running straight at us.”

The pink object was fast—much faster than an ogre. Its gallop was farther than a horse even. It was a pink flash on the plains separating the forest and the city.

The ogre swiped with the tree branch and knocked over some more houses also breaking its tree club. The ogre threw what was left of the club and it landed into the city, taking out the church. It seemed that the city of Hedersburg was finished.

However, the pink blur finally reached the city wall and it rammed full speed into the ogre, sticking it with what seemed to be a lance-sized horn. The ogre toppled over and landed on another cabbage stand.

There was a large hole in its leg, reaching through the other side. Richie and Clayton looked up from their panic, they finally realized what it was. It was a pink unicorn. It was an angry, almost scary-looking, pink unicorn.

Unicorns are taller than the average horse, and typically have a long, spiral horn, but this one was different. Its horn had been the size of a lance. I say had because it began to shrink from its lance-size and return to a regular unicorn horn. The ogre tried to stand up, which is very hard for a beast whose leg had a huge hole in it.

However, it did manage to turn around and face the unicorn. It howled. My guess is it wanted to scare the unicorn away, but the unicorn just glared at the beast, not flinching; not blinking.

It was hard to tell from the commotion, but it seemed like the unicorn whispered an incantation that changed its horn. The horn turned from a regular horn to a large broad sword, and then there was a huge sloosh sound and blood splattered upon the dead bodies and witnesses.

The unicorn had split the ogre in two. Its natural pink body changed to crimson as it soaked up the ogre’s blood. It was hard to see, but underneath the blood, the unicorn carried an uncharacteristic gaze, unbecoming for a unicorn. It had such hate and loathing in its eyes; it didn’t seem like a unicorn at all.

It was more like a man. The horn shrunk back to a regular horn. Panting, the unicorn walked closer, towards the gathering crowd. The crowd shrunk back.

In the crowd’s defence, it was quite unusual. Unicorns never spoke; unicorns never slew ogres. Unicorns weren’t full of hate. Something was different. Unusual. Terrifying.

And equally uncharacteristic (especially for a citizen of Hedersburg), a child, a young girl, stepped forward amongst the commotion and wiped the blood away from the unicorn’s eyes.

“Thank you,” said the unicorn, “I would really appreciate it.”

The unicorn’s eyes softened as if it was truly a man and not a vicious beast. What… Who was this creature? 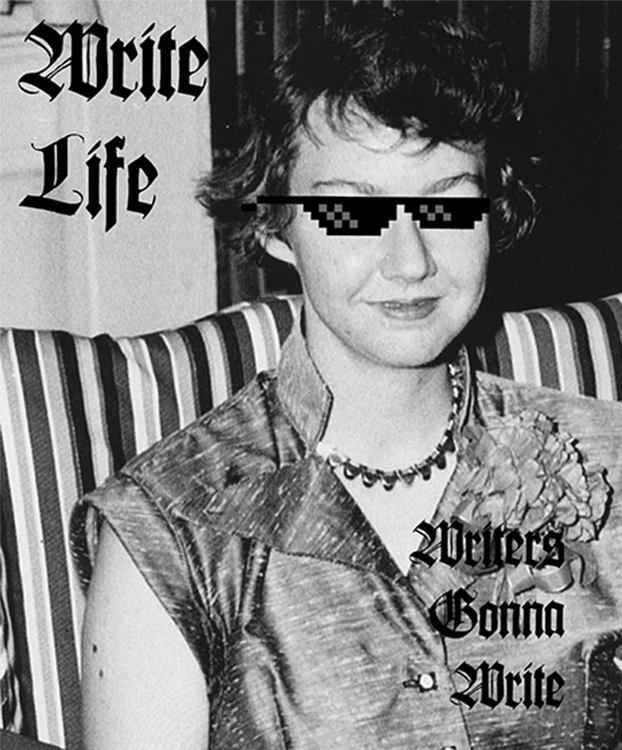